On May 4, the US House of Representatives passed the American Health Care Act (AHCA) on a party-line vote by Republican lawmakers. A month later, the Senate GOP is proposing a vote on their bill, the Better Care Reconciliation bill. While these two bills have different names, the legislation contained in them is virtually identical, with only very slight differences in policy. Both bills drastically reduce the number of Americans with health insurance, with the House bill dropping an estimated 23 million Americans from coverage. Both use the savings from this disgusting sleight of hand to pay for tax breaks to the corporations and wealthy who were taxed under the Affordable Care Act (ACA). But don’t think that only the 23 million who lose their health coverage will be affected, the strings attached by these bills to the tax credits handed down from the federal government will purposefully make the health care of every woman in America less robust, less accessible and more expensive than ever.

Women’s access to reproductive care is already highly dependent on geography, both political and topographical. The map below breaks down counties by the number of clinics per woman that offer reproductive health services, and defines “contraceptive deserts” as those with fewer than 1 clinic per 1000 women. The counties that lack even a single clinic are colored red. Certain state governments have enacted burdensome laws and regulations designed to push abortion and sexual health providers out of business. The result, after years of legislative action, is a hollowing-out of the health services provided in their own states. The total number of women in need of contraceptive methods who live in a contraceptive desert is just over 3 million.

Planned Parenthood alone operates the only full-service contraceptive clinics in 105 counties across America. Moreover, while Planned Parenthood operates only 10% of all health centers offering subsidized family planning, it serves 36% of women who get their contraceptive care from health centers. This is incredibly important to understand when evaluating the effect of the GOP health care bills, both of which defund Planned Parenthood by placing a block on federal reimbursements for a year after the law comes into effect. Not to be outdone by the House in defunding Planned Parenthood, the Senate bill also bars any health care plan offering abortion coverage from qualifying for the tax credits which are supposedly how the GOP plan will keep costs down (spoiler: they won’t). The cumulative effect of these measures cannot be understated, as a huge number of women would almost certainly lose access to both birth control and abortion services. 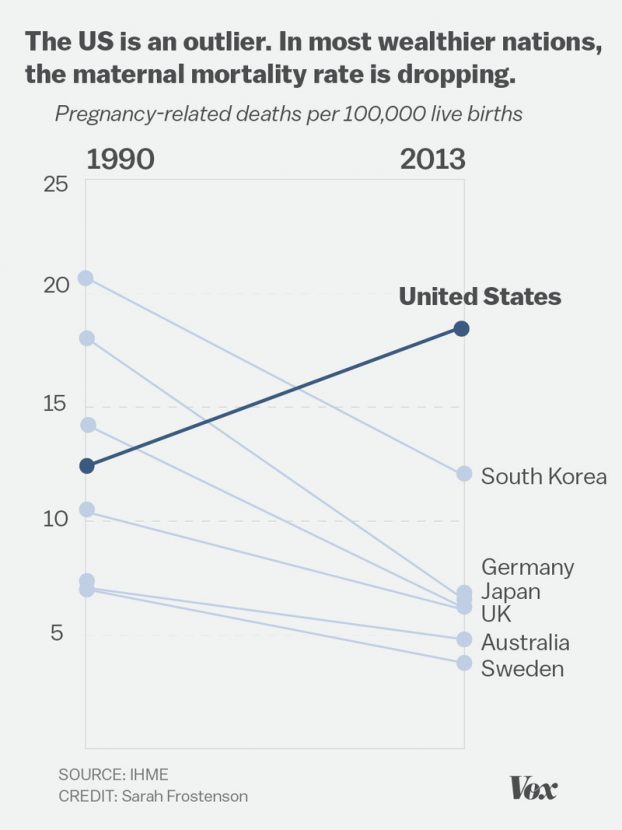 The U.S. already holds the dubious distinction of being one of the only wealthy nations to see its maternal mortality rate increase in recent years. Most other nations with America’s level of wealth have seen a consistent decline in the numbers of women dying due to pregnancy complications. A significantly contributing factor to this rise has been the reduction in family planning clinics across the nation. Texas saw its maternal mortality rate double in just two years after state legislators cut two-thirds of the family planning budget and closed all Planned Parenthood clinics. Another major cause of that spike was the huge disparity of health outcomes among black women in Texas who despite representing 11% of all pregnancies, are a staggering 29% of those who died after childbirth. An important contributing factor of that racial gap was the low rates of health care access among black women that holds true not just in Texas, but across America. The AHCA would actively undo the modest improvements brought by Obamacare to the maternal mortality rate, as it would remove maternal care from the list of “essential health benefits” which were required in every plan sold under Obamacare. The same section of the Senate bill that removes maternal care from that list also removes neonatal, mental health services, and substance abuse treatments from required coverage in health plans.

The Threat to Washington State Families

Washington State would be particularly vulnerable to many of these effects, because of the way our state enacted the Medicaid expansion under Obamacare. Seven states, including Washington, have what are known as “trigger clauses” in the law passed to expand Medicaid. These laws immediately terminate the Medicaid expansion if the level of federal matching funds decreases, without any need for the state legislature to take action. A sudden termination of the expansion would upend access to maternal care, birth control, and children’s health care. Under the ACA and Washington’s Cover All Kids law, Washington has more than halved the number of children without health insurance. This reduction also served to level the racial disparities that had previously existed among children’s access to health insurance, as seen in the graph below. If the AHCA is passed, many of the health equity gains made by communities of color in Washington would be lost, and wider health outcome disparities among children and youth of color would reemerge. To keep health care affordable, accessible and robust in Washington state, call your representatives and demand that they oppose the AHCA either in the Senate this week, or if the bill comes back to the House for reconciliation. 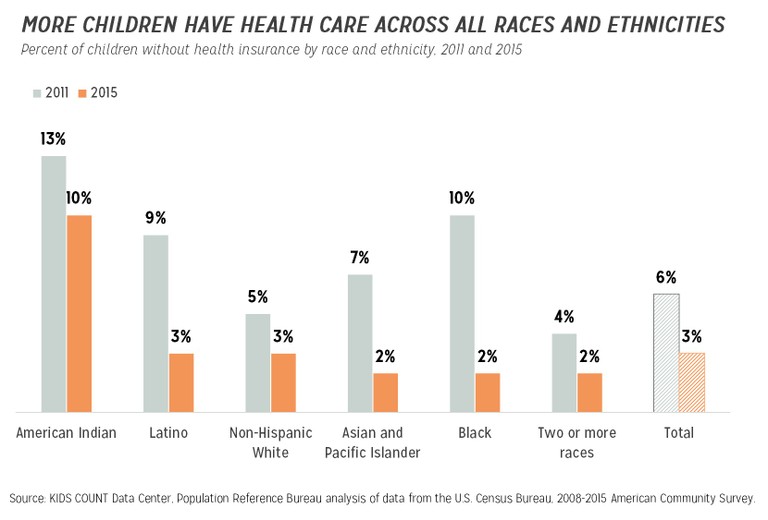